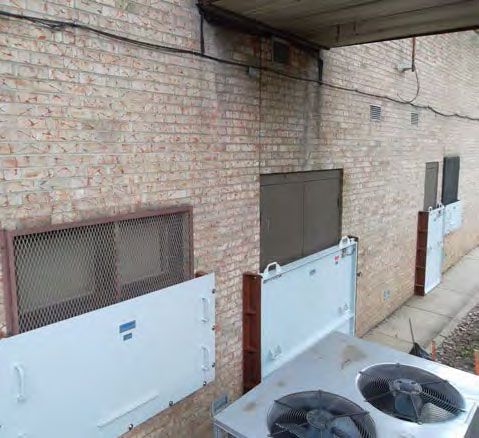 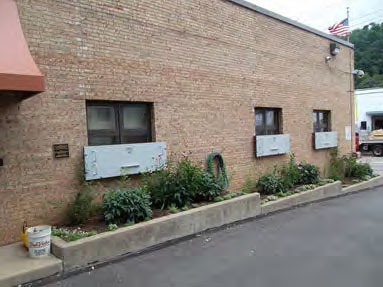 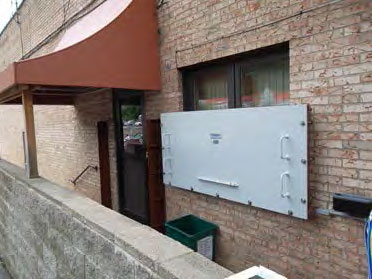 Project Description: The Etna Municipal Building lies in the 100-year floodplain adjacent to Pine Creek, near Pittsburgh in Allegheny County. The building, which houses the Borough Office, Police and Fire Departments, is susceptible to floods of a 10-year or greater magnitude. Significant damage to the building and contents occurred in 1986 and 2004. Damages in 2004 (Hurricane Ivan) approached $1 million dollars to the building and contents and loss of thousands of public records and documents. The Borough also experienced loss of function and services for a significant period of time following the 2004 flood and temporary relocation was required for several months.

In May 2013, a $203,000 Hazard Mitigation Grant Program project was approved to design and install removable flood barriers to protect the Municipal and Police offices, utilities access and document storage area to a 100-year flood elevation. The Fire Department vehicle bay was not included in the project.

Issues Encountered: The susceptibility of the Municipal Building to flood was identified in the 2004 federal disaster. Efforts to develop a mitigation solution to this risk were frustrated by a number of factors. Initial proposals to relocate the Borough offices and services or elevate the existing building proved too costly based on the limits of the FEMA required benefit-cost effectiveness and lack of alternative locations for those borough functions.

Redesign to higher protection standards, difficulties in the bid process and identifying system elements of sufficient design, manufacture, and performance standards extended the time to complete the project (Although the project was completed within the original period of performance).

As noted above, the project did not include construction and installation of flood barriers to protect the three Fire Department vehicle bays due to the additional costs that could not be supported by the initial benefit-cost analysis. The Borough is exploring other funding opportunities to address this area of concern.

Current storage of the flood barriers at a separate location and the associated retrieval time adds significantly to the time required for deployment of the system. The Borough is currently in the process of designing and constructing a storage facility at the Municipal Building which will greatly decrease the time required for deployment in advance of a flood event.

Funding Stream(s): The $203,000 project was funded by the FEMA Hazard Mitigation Grant Program (HMGP) with matching State (22%) and local (3%) funding.