To learn more about the hazards profile in the 2018 State HMP Update, click on each hazard below. 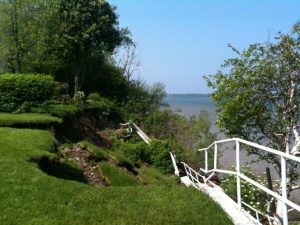 Coastal erosion is a natural coastal process in which sediment outflow exceeds sediment inflow at a particular location. These sediments are typically transported from one location to another by wind, waves, currents, tides, wind-driven water, waterborne ice, runoff of surface waters, or groundwater seepage. Depending on the location and processes in place, coastal erosion can take place very slowly, whereby the shoreline shifts only inches to a foot per year; or more rapidly, whereby changes can exceed ten feet per year. Intense storms and human interference can result in avulsive events where large portions of a beach or dune are washed away by strong currents and large waves. With the exception of portions of Erie County, coastal erosion is not a hazard for communities in Pennsylvania. [/reveal]

Drought is a natural climatic condition which occurs in virtually all climates, the consequence of a natural reduction in the amount of precipitation experienced over a long period of time, usually a season or more in length.  High temperatures, prolonged winds, and low relative humidity can exacerbate the severity of drought.  This hazard is of particular concern in Pennsylvania due to the presence of farms as well as water-dependent industries and recreation areas across the Commonwealth.  A prolonged drought could severely impact these sectors of the local economy, as well as residents who depend on wells for drinking water and other personal uses.[/reveal]

An earthquake is the motion or trembling of the ground produced by sudden displacement of rock usually within the upper 10-20 miles of the Earth's crust. Earthquakes result from crustal strain, volcanism, landslides, or the collapse of underground caverns. Earthquakes can affect hundreds of thousands of square miles, cause damage to property measured in the tens of billions of dollars, result in loss of life and injury to hundreds of thousands of persons, and disrupt the social and economic functioning of the affected area. Most property damage and earthquake-related deaths are caused by the failure and collapse of structures due to ground shaking which is dependent upon amplitude and duration of the earthquake.[/reveal]

Extreme cold temperatures drop well below what is considered normal for an area during the winter months and often accompany winter storm events. Combined with increases in wind speed, such temperatures in Pennsylvania can be life threatening to those exposed for extended periods of time. Extreme heat can be described as temperatures that hover 10°F or more above the average high temperature for a region during the summer months. Extreme heat is responsible for more deaths in Pennsylvania than all other natural disasters combined .[/reveal]

Flooding is the temporary condition of partial or complete inundation on normally dry land and it is the most frequent and costly of all hazards in Pennsylvania.  Flooding events are generally the result of excessive precipitation. General flooding is typically experienced when precipitation occurs over a given river basin for an extended period of time. Flash flooding is usually a result of heavy localized precipitation falling in a short time period over a given location, often along mountain streams and in urban areas where much of the ground is covered by impervious surfaces. The severity of a flood event is dependent upon a combination of stream and river basin topography and physiography, hydrology, precipitation and weather patterns, present soil moisture conditions, the degree of vegetative clearing as well as the presence of impervious surfaces in and around flood-prone areas. Winter flooding can include ice jams which occur when warm temperatures and heavy rain cause snow to melt rapidly. Snow melt combined with heavy rains can cause frozen rivers to swell, which breaks the ice layer on top of a river. The ice layer often breaks into large chunks, which float downstream, piling up in narrow passages and near other obstructions such as bridges and dams. All forms of flooding can damage infrastructure.[/reveal]

In addition to flooding and severe winds, hail is another potential damaging product of severe thunderstorms. Hailstorms occur when ice crystals form within a low pressure front due to the rapid rise of warm air into the upper atmosphere and the subsequent cooling of the air mass. Frozen droplets gradually accumulate on the ice crystals until, having developed sufficient weight, they fall as precipitation in the form of balls or irregularly shaped masses of ice greater than 0.75 inches in diameter. The size of hailstones is a direct function of the size and severity of the storm. High velocity updraft winds are required to keep hail in suspension in thunderclouds.  The strength of the updraft is a function of the intensity of heating at the Earth's surface. Damage to crops and vehicles are typically the most significant impacts of hailstorms.  Areas in eastern and central Pennsylvania typically experience less than 2 hailstorms per year while areas in western Pennsylvania experience 2-3 annually.[/reveal]

Hurricanes, tropical storms, and nor'easters are classified as cyclones and are any closed circulation developing around a low-pressure center in which the winds rotate counter-clockwise (in the Northern Hemisphere) and whose diameter averages 10-30 miles across. While most of Pennsylvania is not directly affected by the devastating impacts cyclonic systems can have on coastal regions, many areas in the state are subject to the primary damaging forces associated with these storms including high-level sustained winds, heavy precipitation, and tornadoes. Areas in southeastern Pennsylvania could be susceptible to storm surge and tidal flooding. The majority of hurricanes and tropical storms form in the Atlantic Ocean, Caribbean Sea, and Gulf of Mexico during the official Atlantic hurricane season (June through November). [/reveal]

An invasive species is a species that is not indigenous to the ecosystem under consideration and whose introduction causes or is likely to cause economic or environmental harm or harm to human health. These species can be any type of organism: plant, fish, invertebrate, mammal, bird, disease, or pathogen. Infestations may not necessarily impact human health, but can create a nuisance or agricultural hardships by destroying crops, defoliating populations of native plant and tree species, or interfering with ecological systems.[/reveal]

A landslide is the downward and outward movement of slope-forming soil, rock, and vegetation reacting to the force of gravity. Landslides may be triggered by both natural and human-caused changes in the environment, including heavy rain, rapid snow melt, steepening of slopes due to construction or erosion, earthquakes, and changes in groundwater levels. Mudflows, mudslides, rockfalls, rockslides, and rock topples are all forms of a landslide. Areas that are generally prone to landslide hazards include previous landslide areas, the bases of steep slopes, the bases of drainage channels, developed hillsides, and areas recently burned by forest and brush fires.[/reveal]

Lightning is a discharge of electrical energy resulting from the build-up of positive and negative charges within a thunderstorm.  The flash or "bolt" of light usually occurs within clouds or between clouds and the ground.  A bolt of lightning can reach temperatures approaching 50,000°F. On average, 89 people are killed each year by lightning strikes in the United States.  Within Pennsylvania, the annual average number of thunder and lightning events a given area can expect ranges between 40-70 events per year.[/reveal]

A pandemic occurs when infection from of a new strain of a certain disease, to which most humans have no immunity, substantially exceeds the number of expected cases over a given period of time. Such a disease may or may not be transferable between humans and animals. [/reveal]

Radon is a cancer-causing natural radioactive gas that you can't see, smell, or taste.  It is a large component of the natural radiation that humans are exposed to and can pose a serious threat to public health when it accumulates in poorly ventilated residential and occupation settings.  According to the EPA, radon is estimated to cause about 21,000 lung cancer deaths per year, second only to smoking as the leading cause of lung cancer.  An estimated 40% of the homes in Pennsylvania are believed to have elevated radon levels. [/reveal]

Subsidence is a natural geologic process that commonly occurs in areas with underlying limestone bedrock and other rock types that are soluble in water. Water passing through naturally occurring fractures dissolves these materials leaving underground voids. Eventually, overburden on top of the voids causes a collapse which can damage structures with low strain tolerances. This collapse can take place slowly over time or quickly in a single event, but in either case. Karst topography describes a landscape that contains characteristic structures such as sinkholes, linear depressions, and caves. In addition to natural processes, human activity such as water, natural gas, and oil extraction can cause subsidence and sinkhole formations [/reveal]

A wind storm can occur during severe thunderstorms, winter storms, coastal storms, or tornadoes. Straight-line winds such as a downburst have the potential to cause wind gusts that exceed 100 miles per hour.  Based on 40 years of tornado history and over 100 years of hurricane history, FEMA identifies western and central Pennsylvania as being more susceptible to higher winds than eastern Pennsylvania. A tornado is a violent windstorm characterized by a twisting, funnel-shaped cloud extending to the ground. Tornadoes are most often generated by thunderstorm activity (but sometimes result from hurricanes or tropical storms) when cool, dry air intersects and overrides a layer of warm, moist air forcing the warm air to rise rapidly. The damage caused by a tornado is a result of high wind velocities and wind-blown debris.  According to the National Weather Service, tornado wind speeds can range between 30 to more than 300 miles per hour. They are more likely to occur during the spring and early summer months of March through June and are most likely to form in the late afternoon and early evening. Most tornadoes are a few dozen yards wide and touch down briefly, but even small, short-lived tornadoes can inflict tremendous damage. Destruction ranges from minor to catastrophic depending on the intensity, size, and duration of the storm. Structures made of light materials such as mobile homes are most susceptible to damage. Waterspouts are weak tornadoes that form over warm water and are relatively uncommon in Pennsylvania. Each year, an average of over 800 tornadoes is reported nationwide, resulting in an average of 80 deaths and 1,500 injuries. Based on NOAA Storm Prediction Center Statistics, the number of recorded F3, F4, & F5 tornadoes between 1950-1998 ranges from <1 to 15 per 3,700 square mile area across Pennsylvania. A water spout is a tornado over a body of water. [/reveal]

A wildfire is a raging, uncontrolled fire that spreads rapidly through vegetative fuels, exposing and possibly consuming structures. Wildfires often begin unnoticed and can spread quickly, creating dense smoke that can be seen for miles. Wildfires can occur at any time of the year, but mostly occur during long, dry hot spells.  Any small fire in a wooded area, if not quickly detected and suppressed, can get out of control.  Most wildfires are caused by human carelessness, negligence, and ignorance. However, some are precipitated by lightning strikes and in rare instances, spontaneous combustion. Wildfires in Pennsylvania can occur in fields, grass, brush, and forests. According to the PA DCNR, 98% of wildfires in Pennsylvania are a direct result of people, often caused by debris burns. [/reveal]

Winter storms may include snow, sleet, freezing rain, or a mix of these wintry forms of precipitation. A winter storm can range from a moderate snowfall or ice event over a period of a few hours to blizzard conditions with wind-driven snow that lasts for several days. Many winter storms are accompanied by low temperatures and heavy and/or blowing snow, which can severely impair visibility and disrupt transportation. The Commonwealth of Pennsylvania has a long history of severe winter weather. [/reveal]